This research activity is focused on

This activity is carried out in collaboration with Prof. Enzo Wanke (University of Milano Bicocca, Milan, Italy)

The study of neuronal bursting activity, observed in cell-culture, is physiologically important because is correlated with synaptic transmission, plasticity, and information processing. However, besides strong ethical issues related to the use of animal models, there are many limitations due to experimental setup and neural signaling acquisition.

We propose a stochastic modeling approach to simulate neural dynamics observed in networks of neocortical neurons from an ex vivo normal mouse. Specifically, we devised a stochastic version of the Izhichevich’s model of cortical neurons, and simulated a network of excitatory and inhibitory neurons also accounting for cell signaling delays. No specific learning rules were used throughout the simulation time. We show spontaneous bursting activity while mimicking balanced and hyper-excitable networks through modulation of the inhibitory synaptic weights. Furthermore, we validate our findings comparing the simulated cumulative probability functions of the firing spike histograms with the ones obtained in cultured networks of dissociated cortical neurons from ex vivo mice.

The dynamics of a general post-synaptic neuron can be described as follows (Valenza et al. 2016): 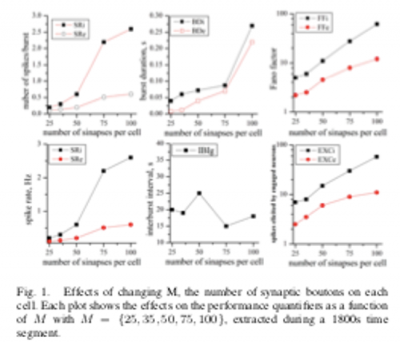 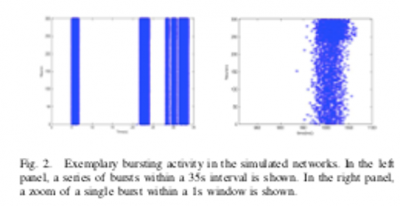 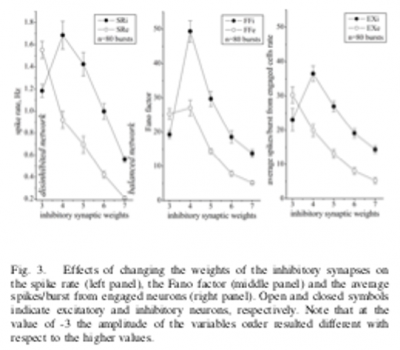 Experimental evidences on the role of the synaptic glia as an active partner together with the bold synapse in neuronal signaling and dynamics of neural tissue strongly suggest to investigate on a more realistic neuron–glia model for better understanding human brain processing. Among the glial cells, the astrocytes play a crucial role in the tripartite synapsis, i.e. the dressed neuron. A well-known two-way astrocyte–neuron interaction can be found in the literature, completely revising the purely supportive role for the glia. The aim of this study is to provide a computationally efficient model for neuron–glia interaction. The neuron–glia interactions were simulated by implementing the Li–Rinzel model for an astrocyte and the Izhikevich model for a neuron. Assuming the dressed neuron dynamics similar to the nonlinear input–output characteristics of a bipolar junction transistor, we derived our computationally efficient model. This model may represent the fundamental computational unit for the development of real-time artificial neuron–glia networks opening new perspectives in pattern recognition systems and in brain neurophysiology. 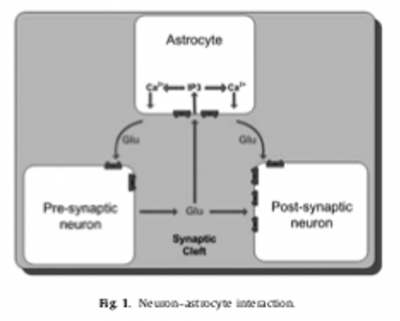 We found the following critical regions of neuron-astrocyte dynamics: 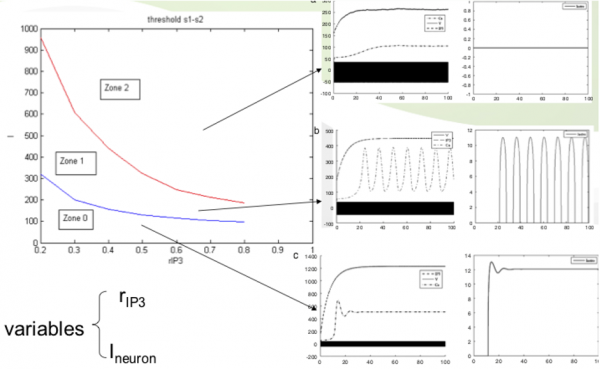 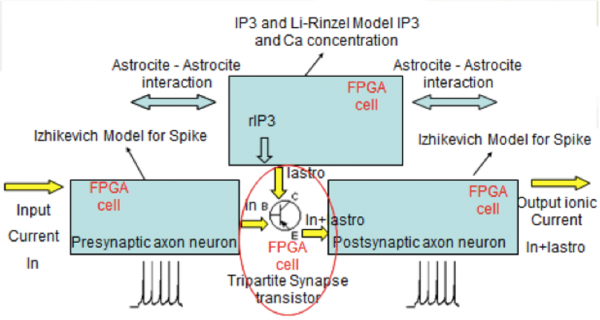 Our model is inspired by a nonlinear transistor-like approach: 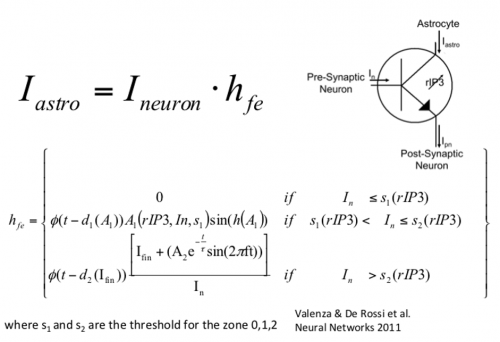 Note: Matlab code for this model is available for download here

We propose a novel and efficient computational implementation of a Spiking Neuron-Astrocyte Network (SNAN). Neurons are modeled according to the Izhikevich formulation and the neuron-astrocyte interactions are intended as tripartite synapsis and modeled with the previously proposed nonlinear transistor-like model. Concerning the learning rules, the original spike-timing dependent plasticity is used for the neural part of the SNAN whereas an ad-hoc rule is proposed for the astrocyte part. SNAN performances are compared with a standard spiking neural network (SNN) and evaluated using the polychronization concept, i.e., number of co-existing groups that spontaneously generate patterns of polychronous activity. The astrocyte-neuron ratio is the biologically inspired value of 1.5. The proposed SNAN shows higher number of polychronous groups than SNN, remarkably achieved for the whole duration of simulation (24 hours). 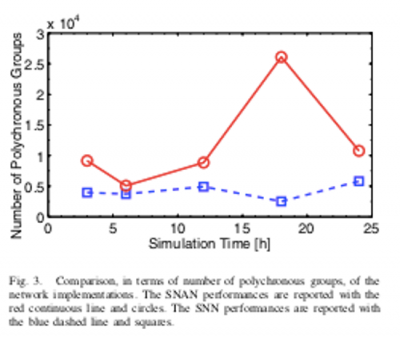 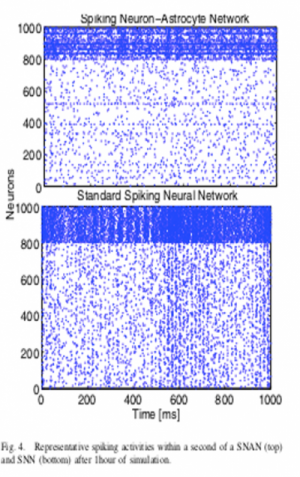